I can haz ‘nother reward! 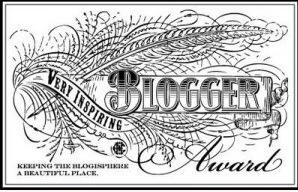 Yay me!  Waaay back when, in a time long gone…or maybe it was a few weeks ago, whatever…my gal-bud Cyril gived me this award, and now I can finally properly thank her for it, and attempt to follow the rules like a good girl.  Really.  I promise.

This is a relatively simple one:

1. Thank the person who nominated me
2. Share 7 things about myself
3. Pass the award to 7 nominees

1)  Thank you -tons-, Cyril my friend.  You have been so patient, and I really appreciate it.  That, and I love this award.  At least the art/graphic on it.  It’s so…Victorian/Steam-age.  *hugs*  JK…I love the whole award.  Very Inspiring is what I find this entire strange virtual playspace we live in, and being inspiring right back at them is one of my goals.  🙂

2)  Hrrm.  7 things.  Must think of something about me that -hasn’t- already been plastered all over this and many other blogs.  ;p

a) I haz a hat!  Seriously, I love hats.  I mostly wear my ears, these days, but I’m working on a bigger pair so I can wear them with my hats.  I have a “genuine” Indiana Jones hat, with the little tag and all, from Vegas.  I have a purple felt fedora.  I have a promotional giveaway Batgirl gimme cap, camo with the batgirl sign on front in shinies. (special to me, cause it was given to me by my brother who was killed 7 yrs. ago last Sunday. He got it as store manager at the BP where he got shot. *sadface*) I have a ballcap to match most of my outfits (Yay, Walmart. >;<)…blue denim, black cotton, olive green…the troops favorite is the pink one with the pink sequins -all- over it.  Yup.  Love them hats.  Oh!  I haz a hot pink knitted cap with a bobble dealie on top!  Kept waiting for it to get cold enough last winter to justify wearing it, but not so much.  Fl. winter this year = non-existant.

b)  I spend too much.  On a smaller scale, because I have a smaller amount to spend, but still.  $700 a month disability check with a $425 car payment coming out of it doesn’t leave much to play with…but I still do.  Haven’t missed a car payment yet…I love my baby-girl, and won’t do anything to risk her…but other little things?  Like food?  Shyeah, right.  I’m throwing $30 at Teh Book of Face to play stupid little slots games that don’t even give you real money back!  I spend too much.  (I did find some -adorable- pink-leopard spotted fleece (2 yds, $10) and the same in cotton (1 yd, $5) at Walmart.  That’s what I get for wandering past the craft section…>;<)

c)  I want a Rottweiler puppy.  I want one that will grow into a great big lug like my friend Kenet’s dog, Angus.  Head bigger than -mine-.  Sweetest, smartest, sneakiest baby ever…until mine.  *grins*  And I will love him and pet him and squeeze him and call him George.  Or Frank.  Or “Root of all Evil”…Cookie for short.

d)  I love -weird- musicals.  Some of them are nothing but soundtrack, parodies of other musicals.  A few of my favorites:  Reefer Madness The Musical, Cannibal The Musical, A Shoggoth on the Roof, Hedwig and the Angry Inch.  There are more, but I can’t think of them right now. 😉

e)  I’m a sucker for weird/strange/silly candy.  Can’t go into a truck stop with cash in my pocket, I’ll come out with a handful of Lightsaber lollipops (“They really light up!”) which I love because the pop tastes like cotton candy, or The Worlds Longest Candy Necklace, which would be awesome, if the candy tasted at -all- edible.  blech.  Stuff like that.  Or a silly little souvenir thingie, especially if it’s a stuffie, or a lighter, or depending which side of the MD Line we’re on, either a nifty rock, carved or not…or a shell or shark-tooth, usually made into some sort of jewelry.  Love that stuff.

f)  On a related note, I was training to be a long-haul trucker when my RA decided to show its ugly face.  I’d spent 20 some years flat on my duff, scared to risk my disability income by trying to work, and getting more and more dissatisfied and bored.  I had -always- wanted to drive a truck, always been fascinated by them, so when I learned that the local community college had a 3 month course, I went for it.  My fat lazy rear walked a mile to the nearest city transit stop, in February, in Salt Lake UT, before the sun came up, every morning for 4 months.  Then from the bus to the electric train thingie to the stop half a mile from the school, to school.  Hadn’t been in school since 20, hadn’t driven (anything!) for more than a year, total…let’s just say it was…fun.  Would’ve made it, too…except that I kinda choked at intersections.  I was fine on the highway.  I was awesome on the highway.  But in town, with people waiting on me, and trying to slip past me, and ignoring my blindspots, and honking if/when I couldn’t get the air-brakes off fast enough to make it through the light…not so much.  Even took an extra month, to try to fix it…but they finally had to just tell me to go home.  But I tried!  I stuck to it, for the first time!  I am proud of that.  And now, locked somewhere in my head, are the names of -every- single piece of a diesel tractor engine, wires, parts, shocks, lights, panels, etc.  But I’ll prolly just stick with calling them all thingamajigs, or doohickeys.  ;p

g)  I “rescue” dog toys.  Mostly the little stuffies.  I look at this cute little critter, usually hand-sized, whose ultimate destiny is to die shredded to tiny pieces by some ugly little yippy-yappy…and I just have to rescue it.  Of course I can’t buy -all- the stuffies…can’t even buy more then one of the same kind.  But I just consider them…clones, kinda.  So if I rescue the one, I’ve rescued them all, by default.  *g*

(*pouts*  Dougs poems are uniquely shaped, some lines out, some under, etc. Unfortunately I don’t seem to have the tech./html knowledge to make WP do the formatting correctly, so we’ll just have to settle for this.  🙂 )

For Larry, the kids, the cats,

For our good times,

For the times when no castle built

could be big enough.

For the times when our tiny den

For the laughter, the learning,

the fighting and forgiving.

But especially for the love

while growing up together

through more than thirty summers

And thought that daffodils

for as many springs.

Up to my knees in leaves

to make angels in the snow.

So many things I’ve done and seen

in all my seasons

but Christmas Eve I found just once

in a pair of eyes.

From “Barefoot on Warm Sidewalks” by Doug Baldauf, c. 1975