Wanna show you my favorite birfday present, from my best bud, Ben. 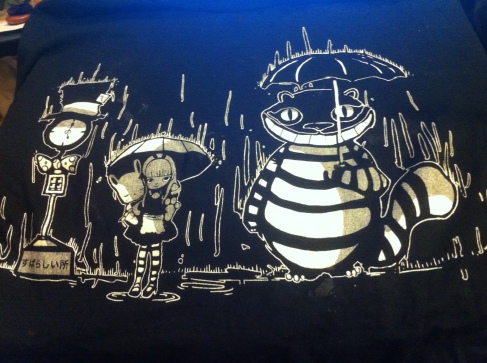 Alice in Wonderland as Miyazaki’s Totoro!  Since two of my favorite things are anything Alice, and (almost) anything Japanese…well, it just rocks, that’s all.

Speaking of Japanese, and rocking…have any of you heard BabyMetal yet?  Adorable little Japanese girls…singing heavy metal, with a uniquely Japanese twist.  “Headbanger” and “Megitsune” are my faves, although so far I’ve loved everything they’ve come out with.

Hooray for summer in Florida… >.<

(*pouts*  Dougs poems are uniquely shaped, some lines out, some under, etc. Unfortunately I don’t seem to have the tech./html knowledge to make WP do the formatting correctly, so we’ll just have to settle for this.  🙂 )

For Larry, the kids, the cats,

For our good times,

For the times when no castle built

could be big enough.

For the times when our tiny den

For the laughter, the learning,

the fighting and forgiving.

But especially for the love

while growing up together

through more than thirty summers

And thought that daffodils

for as many springs.

Up to my knees in leaves

to make angels in the snow.

So many things I’ve done and seen

in all my seasons

but Christmas Eve I found just once

in a pair of eyes.

From “Barefoot on Warm Sidewalks” by Doug Baldauf, c. 1975

This one is for/about a friend of mine in Sacramento. He inspired it, anyway, but it’s mostly just the picture in my head of that time.

Shot glasses and swastikas, buzz-cut and bowlered,
Trickster sits on my couch in the summer heat.
His facile tongue dances around words as casually
and as beautifully as a moth around a flame,
soaring and diving, in and out of trouble,
in and out of drama, melodrama, and foolish humor.
Taking side trips into blackest despair
before climbing back out again
to dance around the fire, laughing,
like a sacred clown.